ROW FOR THE CURE

11 Sep ZLAC is Rowing for the Cure

Posted at 12:56h in Newsroom, Uncategorized by Francisco Munoz 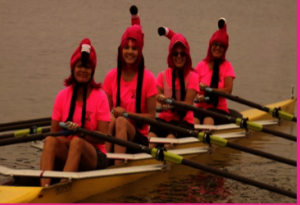 One of Susan G. Komen San Diego’s longest tenured partners, ZLAC—the oldest existing women’s rowing club in the United States, has given more than $100,000 over the last 19 years. As a socially active community of 456 women who support one another, it’s no wonder that the tenacity of the originators is still felt at their boathouse in Mission Bay. The names of the four originators is how ZLAC got its name—Zulette, Lena, Agnes, and Caroline.

ZLAC was founded in 1892 by Lena Polhamus Crouse, the daughter of Captain Albert A. Polhamus, a pilot on the California coast and captain of the tug Santa Fe. She persuaded her sisters, Caroline and Agnes, and their friend Zulette Lamb to form a rowing club. Rowing was more than a popular sport; it was also a way to get around San Diego Bay, albeit in a butcher boat.

In 2000, Mary Bush, an avid rower in Portland Oregon, brought her love of the sport and love of Susan G. Komen to San Diego. Mary, a 37 year member and incoming President-Elect, has been supporting the club and it’s philanthropic work for 37 years. Each year, masters rowers raise money for Susan G. Komen San Diego by participating in Row for the Cure. In 2005, one crew transformed the Polly Neal shell into the “Pink Cadillac” by adding fins and raced as the “Pink Ladies” with pink hair, pink bandanas, and rhinestone glasses. 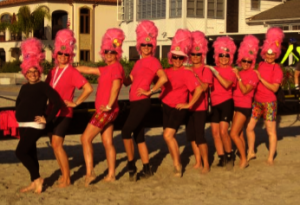 The reason they do it is simple: the women of ZLAC are a women’s community. The members have been impacted directly or indirectly from breast cancer and as a community they aim to support the whole person because too many members have suffered and died from breast cancer. They are there in times of joy and in times of sorrow. They come together to lend a hand by driving other members to a doctor appointments, helping with childcare, or creating a meal train.

ZLAC’s goal is to make a difference in the battle against breast cancer. It is a personal battle and personal effort that goes into Row for the Cure. Many members row the course because they have loved ones who cannot. They row in honor and in memory of their friends and family.

As one of the members sums it up best, “Let’s not let the next generation be impacted by breast cancer like previous generations,” (Fran Abrams).

To register for this year’s Row for the Cure, click here.