Posted at 12:01h in Newsroom by Francisco Munoz

They were co-workers first, two working mothers with similar jobs at the Sycuan Casino in El Cajon. Then they were casual friends, always up for hellos and chit-chat when they met in the hall. 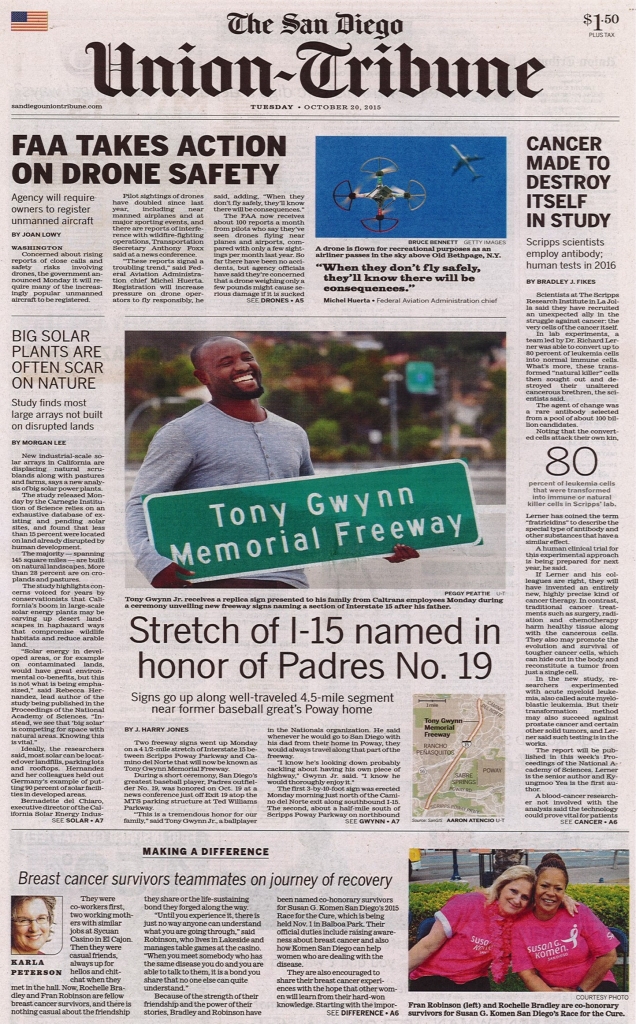 Now, Rochelle Bradley and Fran Robinson are fellow breast cancer survivors, and there is nothing casual about the friendship they share or the life-sustaining bond they forged along the way.

“Until you experience it, there is just no way anyone can understand what you are going through,” said Robinson, who lives in Lakeside and is a table-games manager at the casino. “When you meet somebody who has the same disease you do and you are able to talk to them, it is a bond you share that no one else can quite understand.”

Because of the strength of their friendship and the power of their stories, Bradley and Robinson have been named co-honorary survivors for Susan G. Komen San Diego’s 2015 Race for the Cure, which is being held Nov. 1 in Balboa Park. Their official duties include raising awareness about breast cancer and also how Komen San Diego can help women who are dealing with the disease.

They are also encouraged to share their breast cancer experiences with the hope that other women will learn from their hard-won knowledge. Starting with the importance of having someone to share that experience with.

“Most women really struggle with what it means to not have a breast anymore or to not have hair anymore. So it is important to meet another woman who is a survivor,” said Laura Farmer Sherman, president and CEO of Susan G. Komen San Diego. “You’ve got to have somebody to survive with. Everybody needs a buddy.”

Diagnosed with breast cancer in 2006, Bradley, who lives in Emerald Hills and is an assistant director for Sycuan’s slot machines, was the experienced one. By the time Robinson was diagnosed in 2010, Bradley had been through radiation, chemotherapy, multiple surgeries and her share of health setbacks. She knew the challenges of navigating the treatment landscape, and she had some important survival tips to share.

“I told her, ‘When people ask if they can help you, take it, because you’ll need it,’” Bradley remembered. “I used to tell people I didn’t need any help, but you do need help. You need a support system. We would talk and share stories and compare notes. It’s a good feeling to be able to talk to someone who has experienced the same thing you have.”

It was also important for the two women to share the ways in which their stories diverged.

Bradley, a native San Diegan, had a history of breast cancer in her family. Two years after Bradley was diagnosed and had gone through radiation treatment, her father died of breast cancer. At her father’s memorial service in Michigan, she discovered that many of her cousins and aunts were also struggli

ng with the disease.

So when she returned from Michigan, Bradley shared the details of her father’s cancer and her family’s history with her oncologist, something she hadn’t done before because she didn’t know how serious it really was. In short order, she got genetic testing and discovered she tested positive for the BRCA2 genetic mutation, which can increase the risk of cancer. She then had a double mastectomy and a hysterectomy. She has been cancer free for almost 10 years.

“I was in denial about my father’s history. It was like I just didn’t want to believe it,” Bradley, 47, said. “What I really want women to know is the importance of getting their mammograms. And it is so important to communicate with your physicians. Don’t procrastinate. Early detection is still the best.”

Robinson has no history of breast cancer in her family, but she got yearly mammograms anyway, just to make sure. When she found a lump on her chest just six months after a clean mammogram, she wasn’t too worried. A second mammogram revealed nothing, but an ultrasound did. In 2010, Robinson was diagnosed with Stage 3 triple negative breast cancer. She has been fighting it ever since.

“It took me a long time to accept that I had cancer. I was going through chemo and radiation, and I was still saying to myself, ‘I don’t have this.’” the 48-year-old Robinson said. “My cancer was very strange, and it was hard to see. I really want to impress on people that they should ask for different kinds of tests if you think something is there. My doctor recommended an ultrasound, and if I hadn’t gone, how would we have known?”

Both women credit Sycuan for allowing them to take the time they needed for treatment and recovery and for being flexible and supportive once they got back on the job. The Sycuan Casino has the largest Race for the Cure team, with more than 600 members raising money for Susan G. Komen San Diego, which funds local breast-health and support programs along with international research.

Read more here and get the full article.