Posted at 09:34h in Newsroom, Survivors, Uncategorized by Francisco Munoz

Tania Curulla’s life shook and forever changed the day she was told to immediately stop breastfeeding because she needed a double mastectomy. “I couldn’t have any milk in my ducts when I went under the knife.” Tania was diagnosed with DCIS (non-invasive breast cancer) in 2013 shortly after she gave birth to her second daughter.

Not being able to feed my baby was the hardest part,” said Tania choking back tears as she thinks back to her first diagnosis. “But truthfully, despite that, I thought I had the easy card. I didn’t even have to take Tamoxifen. I didn’t even feel like I could relate to other survivors because it wasn’t that difficult. 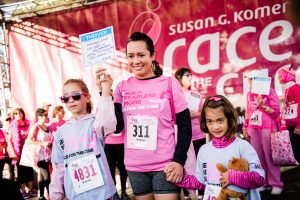 After going through reconstruction and recovery for the better part of a year, Tania put her cancer journey behind her.  She returned to running and completed six half-marathons in 2017. She suffered occasional pain in her back, hip and elsewhere from 2013 to 2017, but assumed it was normal wear and tear from running. The thought never crossed her mind that her discomfort could be related to breast cancer. In late 2017, the pain got progressively worse. She went to an orthopedic surgeon who took an x-ray of her hip and diagnosed her with bursitis, which is inflammation around the tendons and muscles. Tania spent weeks in and out of chiropractors’ and physical therapists’ offices.

During one appointment, Tania was crying from the pain and her PT urged her to see the doctor and explain she was suffering at a pain level of 10.

Her doctor ordered an MRI of her left hip, but those appointments take a while to get on the schedule so in between that time, she went to Whistler in British Columbia for her 10-year wedding anniversary.

I was still hurting so badly, but I wasn’t going to let it ruin my trip.  I told my doctor I was going skiing no matter what and she gave me a shot of cortisone.  It didn’t help. I was in excruciating pain all weekend. I was skiing with ice packs and braces from the pharmacy—doing everything I could to push through the pain.

Tania returned from her trip limping, walking slowly, and went back to work—she is an engineer in San Diego. “One day, I threw up from the pain and was lying on the floor of my office. My co-worker saw me and told me to go home. I insisted on staying to finish a project, but my co-worker called me an UBER.”

After Tania’s MRI, she spent a few more days in extreme pain waiting for the results. “I got a call during a staff meeting. I assumed it was nothing. The doctor said, ‘It looks like you have cancer.’ I was in utter shock. I couldn’t believe it. I thought it had to be a new cancer—I still didn’t think it was breast cancer that spread. I said I didn’t want my same oncologist. I was pissed immediately. I didn’t want to see that guy’s face again.” 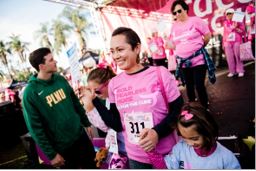 Tania left her office to get blood work done right away. She returned home to do homework with her now seven and nine-year-old daughters, have a family dinner and put the girls to bed. While she and her husband were putting their kids to bed, her oncologist called and left a voicemail. There was an urgent message that said she needed to go to the emergency room. Tania had hypercalcemia, a condition in which she had too high a concentration of calcium in her blood and her liver was not functioning very well. She was admitted to the hospital that night and would spend the spend the next five nights there.

During this time, I was called over to review the results of my bone scans. When the doctor lit them up, there were just white spots everywhere,” Tania bursts into tears reliving her shock, disappointment and fear. “They were on my jaw, my arms, my entire spine, my femur. My doctor said, ‘That’s cancer. Everywhere.’ I just couldn’t believe it—I thought I was fine because of my double mastectomy.

Tania pauses, tries to collect herself to get the next part out.

“The worst of it was that I had seven compression fractures in my spine.”

I remember laying in the hospital thinking the average lifespan of the clinical trial participant for the protocol I would receive was five years and I would be lucky if I got 10.”

Tania is still in treatment for her stage IV breast cancer that has now spread to her brain. Her girlfriends from high school, neighbors, friends, co-workers and of course her husband and family have rallied behind her with an outpouring of love and support.

I hate that my life won’t be as long as I want it to be, but I’m trying to stay positive and do anything I can to prolong my years. I feel like I’m doing well, but the things that make me cry at the drop of a dime are thinking about what I’ll miss out on with my daughters

While stage IV or metastatic breast cancer (MBC) is treatable, it is not currently curable. This is, in part, because we do not know what causes cancer cells to spread. Komen is dedicated to understanding why metastasis occurs and how to stop it, with more than two thirds of its FY18 research grants addressing MBC. If you would like to learn more about our research efforts or see how you can help people like Tania, please visit us at KomenSanDiego.org or email Lizzie@sdkomen.org.