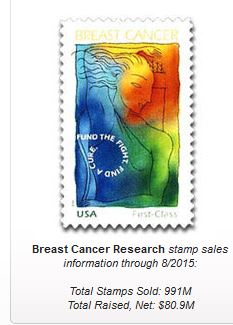 Posted at 11:59h in Newsroom by Francisco Munoz

The leader of the Susan G. Komen breast cancer organization today praised Congress for reauthorizing a postage stamp that funds breast cancer research, but called on both the U.S. House and Senate to consider greater increases to biomedical research, including breast cancer.

“While we value the breast cancer research stamp reauthorized by Congress, the reality is that federal funding of biomedical research has actually dropped by more than 20 percent in real-dollar terms over the past decade,” said Komen President and CEO Dr. Judith A. Salerno. “We’re very concerned about the future of biomedical research, including breast cancer research, without significant increases in federal funding.”

Salerno made the comments while applauding Congress for reauthorization of the Breast Cancer Research Stamp Act, which provides significant funds for breast cancer research at the federal level. The bill reauthorizes the research stamp for four more years. It was approved by both the U.S. House and Senate  and is expected to be signed by President Obama.

The Breast Cancer Research Stamp was first issued in 1998 and has been the U.S. Postal Service’s most popular commemorative stamp, with 991 million sold, generating more than $80 million for breast cancer research and treatment programs. Seventy percent of the stamp’s revenues are distributed to the National Institutes of Health, and 30 percent to the Congressionally Directed Medical Research Program at the Department of Defense.

The stamp is offered by the U.S. Postal Service for 60 cents, and is valid as a 49-cent first class stamp, The stamp was designed by Ethel Kessler, a breast cancer survivor who served as the U.S. Postal Service Art Director. It features Whitney Sherman’s depiction of Diana, the goddess of the hunt, and incorporates the essential message behind the stamp:  “Fund the Fight. Find a Cure.”