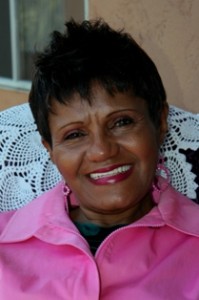 Juanita was diagnosed with stage four breast cancer when she was 49 years old. She went from having a tumor in her breast to having 17 tumors throughout her body, even affecting her blood and lymph nodes.  She had been feeling exhausted and sick but thought it was menopause.  When the doctors told her it was stage four, she thought there must be a five, six, seven, and eight.  She was all smiling at her first treatment while talking to the other women in the waiting room and wondering why they looked so empathetic when she said, I have stage four, what do you have?

She started with aggressive chemotherapy and was unable to leave bed for a year, living in a residential home without family support or permanent housing.  During this time, Mama’s Kitchen began delivering meals to Juanita, catering to her special needs with soft food and even bringing her a treat on her birthday.

“If it wasn’t for Mama’s Kitchen coming and knocking on my door, I wouldn’t have made it, I would have starved.”

When the cancer spread to Juanita’s brain and considered inoperable, she was placed on hospice.  She called Mama’s Kitchen and told them to save their food for someone else who needed it because she was going to die soon, but they kept showing up with her food and a smile, and the hope they brought kept her going.  She started to crochet blankets for infants in the NICU, even though she had never crocheted, and even though the blankets were uneven, it gave her a sense of purpose.

Three years later, Juanita is still stage four, but in remission.  Her advice to others is to keep fighting for life, and don’t let people baby you, have hope because there are people that have it worse than you.  If you are not happy, then do something that makes you happy.  When you are at your lowest, do something for someone else, it gives your life a purpose.