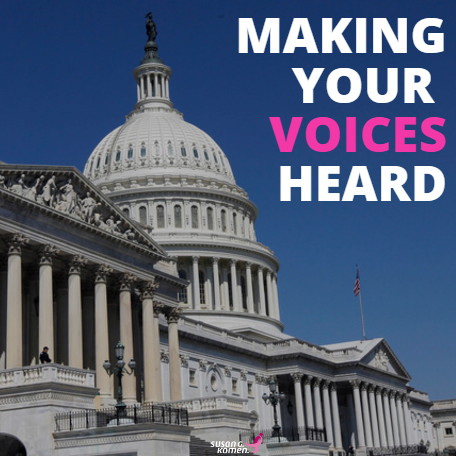 Posted at 10:15h in Newsroom by Francisco Munoz

The San Diego contingent, headed by Lizzie Wittig, director of grants and public policy, met with every elected official from San Diego County.

“We know that current economic conditions have placed unprecedented strains on federal and state budgets,” said Wittig.  “We understand the challenges lawmakers face, but we are asking all to join us in implementing the Breast Cancer Bill of Rights.”

Invest in the Cancer Treatments of Tomorrow

The National Institutes of Health (NIH) and its National Cancer Institute (NCI) have played a role in every major cancer prevention, detection and treatment advance, while also delivering scientific breakthroughs for many other diseases, for decades.

Since 2004, the NIH budget has failed to keep pace with medical inflation. As a result, fewer competitive research project grants are being awarded.

Annual cancer incidence rates are projected to increase by 31 percent over the next decade, growing to 2.1 million new cases expected in 2025 alone.

Biomedical research is a wise investment that will not only defend Americans against cancer and other diseases, but also serves as one of our nation’s primary paths to innovation, global competitiveness and economic growth.

While intravenous (IV) drug therapy is the most well-known component of cancer treatment, an increasing number of cancer drugs today can be administered orally. Insurance coverage has not kept pace with innovation and the growing trend towards orally administered anti-cancer drugs. The result has been patient cost-sharing obligations that are much higher for oral anti-cancer drugs than for drugs delivered through IV-administration.

Patients should not be forced to choose a less appropriate treatment option simply because an insurer provides less coverage for a cancer drug that happens to be administered by mouth rather than intravenously. Patients and their physicians should be free to make treatment decisions based on what is best for that patient.

Read the Bill of Rights here