Posted at 11:04h in Spotlight by Francisco Munoz 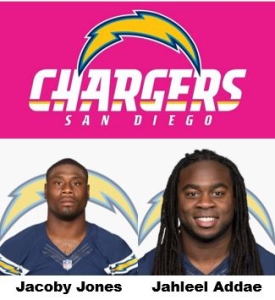 Susan G. Komen San Diego is thrilled to announce our 2015 Honorary Chairs for the upcoming Race for the Cure. For the second year in a row, San Diego Chargers safety Jahleel Addae will serve as Honorary Chair for Susan G. Komen San Diego’s 19th Annual Race for the Cure on Sunday, Nov. 1, 2015 in Balboa Park. New this year is Chargers wide receiver Jacoby Jones, who also will be serving as Honorary Chair. Jones and Addae have both been affected by breast cancer and want to encourage San Diegans to join in the fight against the disease.

Addae’s mother was affected by breast cancer in 2013. He now aims to give back to others going through the same thing his family did. “It’s an honor to partner with Susan G. Komen San Diego again for the 2015 Race for the Cure,” said Addae. “Breast cancer has played a prevalent role in my and my family’s life for the last two years, and it’s encouraging to help raise funds for this important cause in our local community.”

Jones also has a personal connection to the cause, two of his aunts are breast cancer survivors. “It is an honor to be a part of such a special event,” said Jones. “Fighting breast cancer is tough. You hate to see your loved ones hurting and in pain. It takes a lot of strength to keep smiling and battling while going up against breast cancer. It was really hard seeing my aunts going through it especially after chemo when they lost all of their hair. Luckily, my aunts are healthy and doing well today.”

Jones and Addae want to help bring awareness to breast cancer in San Diego and encourage fans to join Team Chargers. Every person who fundraises $125, will be put in to a drawing for four tickets to the Chargers vs. Broncos home game on December 6. The winner of the tickets will also be invited to go on the field during pregame festivities. All Team Charger members will get a Race for the Cure T-shirt, and a Chargers pink wristband.