Posted at 08:17h in Newsroom by Francisco Munoz

Knowing your normal and self-advocating helped save Rowena

Years ago, when Rowena Quinata’s daughter first ran the Race for the Cure®, she didn’t know how close the cause would be to her.

“My daughter originally ran because she felt it was a good cause and a disease that any woman could get,” said 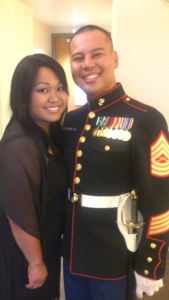 In July 2013, Rowena and her family were living in Hawaii where her husband was stationed. Rowena was 37 years old and celebrating her daughter’s graduation.

“The last thing I expected at this time was to feel a lump in my breast,” said Rowena. “I was not even 40 years old yet, which is the recommended age to get a mammogram and my family had no history of breast cancer.”

Despite this, Rowena knew that something was wrong. Rowena went to her primary care doctor and claimed that she knew her normal, and this was not it. She insisted that tests should be done and got a mammogram, ultrasound, and biopsy.

Rowena was diagnosed with triple negative breast cancer. Triple negative breast cancer (TNBC) is characterized by the lack of three receptors (estrogen, progesterone and HER2) being expressed. Since most treatments available today are aimed at those receptors, TNBC is difficult to treat, and the tumors are often more aggressive. Rowena was treated with TAC chemotherapy and radiation and went into remission.

Rowena and her family moved back to San Diego when her husband was relocated. Life went on, but in March 2016, her symptoms returned. This time the tests showed that her lymph nodes were effected. Rowena underwent an axillary node dissection and platinum node based therapy. Fortunately, her last scan in April showed that she no longer has active cancer cells, but she remains in treatment. 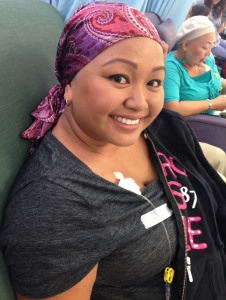 Before Rowena was diagnosed, she was a registered nurse so she saw how patients were effected by a variety of diseases and the effects of their treatments.

“Even though I saw patients and families at work all the time, you never think that anything like this will happen to you,” said Rowena. “I have been out of work due to my lethargy but trying to stay positive helps me get through treatment. You are allowed to be down, but you have to get back up.”

Rowena now participates in the Race for the Cure every year. During her first race, she had family and friends from all over (Guam, Washington, Texas, San Diego, Temecula and Santa Clarita) come to support her. Even through her platinum node therapy she walked.

“Although you hear of the numbers that are diagnosed with breast cancer, you don’t quite understand it until you are with so many people in one place,” said Rowena. “You don’t feel alone at the walk.”