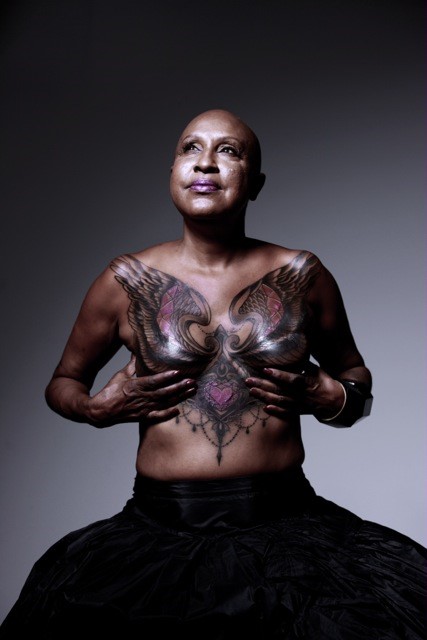 Posted at 10:17h in Spotlight by Francisco Munoz 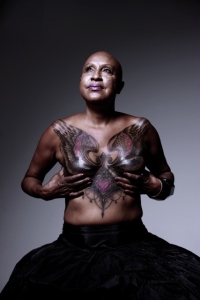 Battling breast cancer doesn’t stop with the last day of chemo or radiation. Women face health and psychological issues for a long time after treatment is completed. One of the most commonly reported breast cancer survivor issues relates to self-esteem and sexuality. Many times a woman’s mastectomy or reconstructive surgery leaves a great deal of scarring and breast deformity. 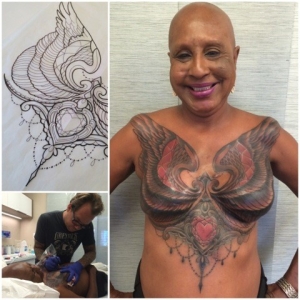 nipple and artistic tattooing for women who have had mastectomies and/or reconstructive breast surgery.

“I have seen firsthand the transformation that takes place when clients take this final step in their recovery,” said Shane. “I want to help cancer warriors reclaim what they have lost.”

Juanita Williams, photographed to the right is one of the women Shane has helped transform. Juanita, single mother of four first found out she had breast cancer when she was only 25 years old and seven months pregnant with her third child. She had a mastectomy on her left breast and gave birth to her daughter a month early, due to the stress after surgery. Her daughter weighed only 4lb 6oz. That was in July of 1987.

24 years later, in 2010, she got breast cancer in her right breast and began the battle again.

Now a two-time survivor, she sought out Shane’s tattooing services to cover her scars into a masterpiece of beauty. Juanita chose the angel wings for all her sisters who lost their battles.

“This process taught me there is beauty after breast cancer,” said Juanita. “Shane gave me hope and beauty again.” 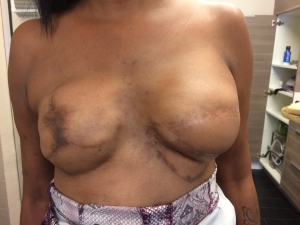 Juanita before her tattoos 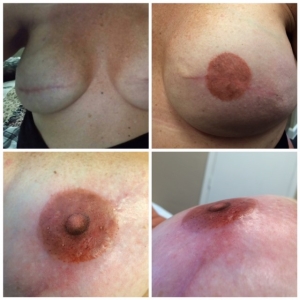 Mastectomy Tattoo also provides 3D nipple tattoos and areola pigmentation. Creating the nipple and areola is the last stage of breast reconstruction. Recreating the nipple and areola gives the reconstructed breast a more natural look and can help hide the mastectomy scars. These procedures are usually outpatient procedures and have few risks. The nipple can be recreated using skin from the reconstructed breast itself after the implant or flap reconstruction has healed. The areola may be created with a tattoo or by grafting skin from the groin area. Skin in the groin area has a similar tone as the skin on the areola. The scar from where the skin is taken can be hidden in the bikini line. 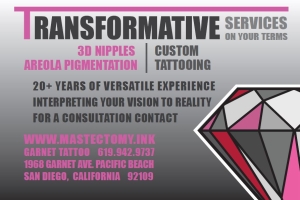