Posted at 08:20h in Newsroom by Jess Rains

Downtown resident, 53-year-old, Lilian Vanvieldt-Gray, will be the 2018 Komen San Diego Race for the Cure® Honorary Breast Cancer Survivor. As the organization’s spokesperson through the 22nd Annual Race for the Cure on Sunday, Nov. 4, Vanvieldt-Gray credits her survival to her mammogram, treatments developed by Komen-funded research, her positive outlook and the unwavering support of her husband, family, employer, Alliant Insurance Service, and her friends.

“The Race for the Cure was the second-best day of my life, after the day I married my husband,” said Vanvieldt-Gray.   “It is overwhelming to have all your friends and family reaffirming their love and support for you. It was also inspiring to see those who have won their breast cancer battle and to meet others still fighting, just like me.” 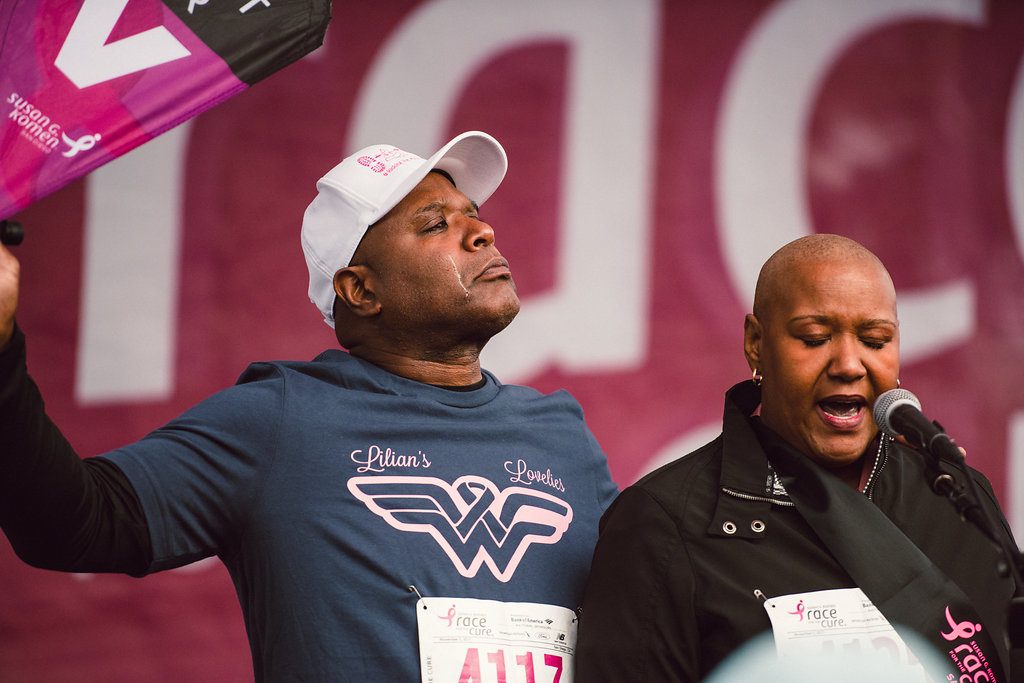 Last year, Vanvieldt-Gray’s husband, Douglas Gray, created a Race for the Cure team of almost 50 friends, colleagues and family to rally behind Lillian.  They raised over $33,000 with over 160 individual donations.  When asked, what’s the secret to becoming one of the largest fundraisers in Komen San Diego’s history? They chuckle and say there isn’t a silver bullet—it’s just in their salesperson nature.

Vanvieldt-Gray’s insurance won’t cover the cost of her final PET scan, and she is prepared to pay $3,000 out of pocket for it, among the other bills rolling in. “We are fortunate to have the means to pay, but other women do not have that option,” said Vanvieldt-Gray. “This is the primary reasons, we are so passionate about raising funds for Komen San Diego.”

Komen San Diego’s Screening and Diagnostic Fund provide tests for women and men who are uninsured or underinsured and who do not qualify for state-funded programs. Komen San Diego’s Financial Assistance Fund supports breast cancer patients’ most critical needs during treatment such as assistance with copays, transportation, food, breast prostheses, childcare, rent, utilities and much more.

Vanvieldt-Gray found out she had breast cancer in an airport on the other side of the world on her way to a family reunion.  The results were accidently posted to her online portal before her doctor had the chance to speak with her.  “You think you know fear, but you don’t,” said Vanvieldt-Gray.  “I experienced a fear that was deep down to my core and it was truly frightening. I had that emotion for 10 days, while I waited to find out more.”

Fortunately, Vanvieldt-Gray was diligent about getting her annual mammograms, but she has dense breasts, which could have kept her tumor from being detected earlier. Studies have found women with high breast density have four to five times higher risk of breast cancer compared to women with low breast density.   In 2011, Komen San Diego helped pass a law in California requiring doctors to send a letter notifying patients after their mammogram if they have dense breasts. after their mammogram. Unfortunately, there are still no standard screening guidelines for women with dense breasts.  However, if a patient receives this notification they should speak with their medical providers about other types of breast imaging and screening tests.

Although Vanvieldt-Gray’s grandfather, father and uncles had prostate cancer and an aunt had breast cancer, she did not know that these were signs that her family could be carriers of the BRCA genetic mutation.  After being diagnosed, Vanvieldt-Gray tested positive for the  BRCA II genetic mutation, which unbeknownst to her increased her risk of a breast cancer diagnosis by 45 to 65 percent.

“I want to use this platform to educate people about the importance of learning their family history and talking about it with their physicians,” said Vanvieldt-Gray.  “Also, as an African American woman, I was shocked to learn breast cancer is the most common cancer among African American women and we also have a lower survival rate than women from other racial and ethnic groups in the United States.”

In San Diego, while the breast cancer incidence rate for African American women is lower than that of Caucasian women their mortality rate is 40 percent

higher. Vanvieldt-Gray finished chemotherapy and her mastectomy, and started daily radiation treatments on April 30, 2018. Komen research supported the development of Adriamycin and Taxol, the two breast cancer therapies that Lilian’s medical team are using to save her life. Since its inception in 1995, Susan G. Komen San Diego has invested more than $19 million in global breast cancer research and local breast health services.  Keeping those dollars in the community, much of that investment has been awarded to scientists and research institutions in San Diego.  Next to the U.S. government, Susan G. Komen is the largest nonprofit funder of breast cancer research in the world.

“I believe in creating possibilities. I have decided that I am going to live,” said Vanvieldt-Gray.  “But getting used to a new normal is challenging. We must do more. We need more research. We need more support services.”

Douglas Gray is using his platform to educate fellow husbands.  “Be there for your wives,” said Gray. “Talk to your employer, come up with a plan on how you can be there for your wife.   There is the Family Medical Leave Act (FMLA) and other options that many people don’t know are available to them.”

Gray and Vanvieldt-Gray’s courage and passion will make a difference for others who are battling this disease.

“This remarkable couple inspires us with their grace and dedication to raising vital funds and rallying their community,” said Shaina Gross president & CEO, Susan G. Komen San Diego. “San Diego is lucky to have them.”