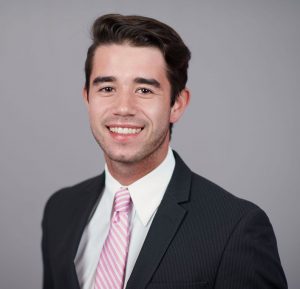 Prior to joining Susan G. Komen San Diego, Michael Walsh was a communications volunteer on Letitia James’ victorious campaign for New York State Attorney General, and was a press intern for her during her time as the New York City Public Advocate. He wrote countless speeches, op-ed’s, and social media content for Letitia James, on topics ranging from women’s health issues to small business empowerment. Michael also interned for NYC Council Member Helen Rosenthal and the Nassau County Office of Housing & Community Development, where he organized a housing fair for 500 homeless Nassau County residents post-Hurricane Sandy and conducted a comprehensive study on New York City’s property ownership.
Michael’s life passion is increasing the equity and success of as many people as possible, no matter what cards they were dealt at birth. He runs a blog, The Forbearance Project, which highlights people from around the world who live their life with something they cannot change (disability, chronic illness, mental illness) in order to not only celebrate them, but use their experiences to teach others how to live a more fulfilling and empathetic life.

Raised in Long Island, New York, and the nephew of a breast cancer survivor, Michael loves all things sports, music, and the outdoors. Michael received a BA in Urban Studies with a concentration in Political Science from Vassar College, in Poughkeepsie, New York. He enjoys blasting his favorite music far too loud, lounging at the beach, and watching the New York Jets slowly but surely end Tom Brady’s reign.