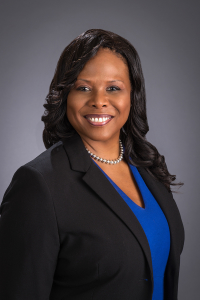 Since the start of her career in 1990, Retired Deputy Chief Hutchinson has celebrated a number of San Diego Fire-Rescue Department firsts. She worked her way up through the ranks and is the first and only African American woman in the history of the Department to be promoted to engineer, captain, battalion chief and her current position, deputy chief.

Mrs. Hutchinson earned an Associate of Science degree in Fire Technology from Miramar College and a Bachelor of Science Degree in Organizational Leadership from National University.

Her last work assignment was in Fire Operations as the B Division Deputy Chief/Shift Commander. She supervised seven battalion chiefs who oversee the seven geographical areas that make up the City of San Diego. She was responsible for the day to day operations of the Department when she was on duty.

Chief Hutchinson has been a community advocate for over 25 years and after being diagnosed with breast cancer in November 2012, she continued her civic service as a spokesperson for Susan G. Komen. Her tireless dedication and commitment to the fire service and her community has earned her much recognition including; Employee of the Quarter twice, the City of San Diego’s Diversity Distinction Award, San Diego Metropolitan Magazine’s, 40 Under Forty Award, San Diego Business Journal’s 2011 Women who Mean Business Award, a nomination for the 2014 San Diego Magazine’s Woman of the Year award and she was honored in 2014 as the San Diego Padres Honorary Bat Girl.

Chief Hutchinson is married to Steve Hutchinson a Lieutenant with the San Diego Police Department and together they have three beautiful daughters and a granddaughter.