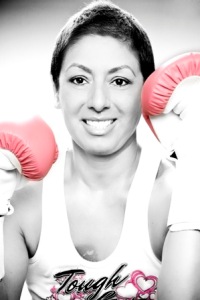 Sonia is back. Back among the living.

The 41-year-old mom and grandmother first felt a lump in her breast three years ago at the age of 38. “I was told I was too young to have breast cancer; to stop wearing under wire bras…” Sonia said. “Since there was no history of breast cancer in my family they thought it was most probably a swollen lymph node.”

“I was getting older. My breasts were changing,” she said, believing that the lump was nothing to worry about. But as her breast got smaller, the lump grew larger.

Then last July, Sonia’s health provider changed to Kaiser Permanente and she started getting notices that it was time for a mammogram. “I never had a mammogram, but I called the next day and scheduled my very first one.” The day following the mammogram Sonia was called and told there were abnormalities on the films and needed to return for an ultrasound. Two additional tumors were discovered.

All four were cancerous.

Because of the size of the tumors Sonia’s doctors opted for chemotherapy first, followed by radiation, in an effort to shrink the tumors. But halfway through chemo, Sonia stopped her treatments.

“I had a great life and chemo took that away from me,” Sonia said. “It took everything, everything.” Sonia’s long term relationship with her boyfriend began to change, “We just weren’t us anymore.” The relationship eventually came to an end. Her beautiful, waist length hair fell out. “Someone at a drive thru window called me ‘sir.’ I was devastated. I gave up and totally closed down,” Sonia said. “I just wanted to be a girl again.” So Sonia, convinced she was dying, gave up the fight.

“I remember walking from the car to our apartment with my daughter, Sydney,” Sonia said. “I had already stopped chemo, but I was still so tired I had to sit down.” Her daughter became furious.

“You’re choosing to sit there and die in front of me,” Sydney said. “You die, you die alone.” Sydney left Sonia alone on the bench and went up to the apartment. To Sonia, the words were like a physical blow.

“My 3-year-old grand-daughter loves everything about life,” Sonia said, realizing she couldn’t give up. “I went up to the apartment, called my doctor and told her I wanted to go back to chemotherapy.”

Sonia credits her daughter for “stopping her own life” to help Sonia navigate hers. Besides getting her through chemo and radiation, Sydney took Sonia’s place as office manager for a San Diego irrigation company so Sonia wouldn’t lose her job.

Following eight rounds of chemotherapy and 35 radiation treatments, Sonia opted for a double mastectomy “as a precaution.” She will return to work in July and hopes to have reconstruction surgery in December.

“The past year has been a roller coaster,” Sonia said. “I’ve never lived by myself,” she said of the apartment in Pacific Beach she’s getting ready to move into. “I’ve got my daughter and granddaughter out on their own… Everything is so good right now. I won’t ever waste another day.”