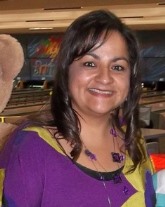 My name is Patricia Cacho-Gomez. I’m a 48 year old wife and mother of two.

I just wanted to share my story to let everyone know that no matter what stage you are diagnosed with, there will be challenges you need to fight and be strong.

I’m especially thankful and grateful for my wonderful family. From the day I was diagnosed with the “C” word, Manuel, my husband held me as if he was never going to let me go. His calm manner and patience helped me control my feelings and focus on what was to come.

My son, Estevan (20 years old) was the informant. He looked up everything and double checked what the doctor’s had told me would happen. We discussed my options as far as surgeries and he consoled me by telling me to be strong and take it day by day.

Bianca, my daughter (11 years old) would draw me pictures of pink ribbons and leave them around the house. She even drew me a time line from when she was born to the time I was diagnosed. All of the pictures were very positive and always said “Be strong and fight”.

Although we never cried together (I did enough of that for everyone) we stuck together and discussed the next steps for healing. Cancer is something that usually happens to someone else and it was pretty overwhelming to find out I had it. I have learned, especially when you are living a nightmare that it takes a special person to stay with you throughout the crisis. I’ve always known how special they are to me and how blessed I am to have them. It’s been a long road and they have been tremendous helpers and supporters.

My parents, sister and brother also helped in my healing process. There wasn’t anything I would ask for that they wouldn’t do for me. From taking me to doctor’s appointments to making dinners, cleaning my house, caring for my kids and staying with me for the day. No matter what was going on they were always there for me. I for that I am very grateful.

I was blessed with gifts, cards, flowers, prayers, dinners, company and thoughtfulness throughout my healing. It was so rewarding to have such a wonder support group to help lift my spirits when I was so down and feeling hopeless.

This is my timeline story.

March 2012
March 2012 I lost 40 pounds on the Sharp Weight Management Program. My doctor wanted to take me off of my blood pressure medication. I went in and had blood work done and my mammogram was due as well.

I went in for a biopsy and 2 days later I was diagnosed with stage Zero- Ductal Carcinoma in Situ.  Ductal carcinoma in situ (DCIS) of the breast is an early, localized cluster of cancer cells that start in the milk passages (ducts) but have not penetrated the duct walls into the surrounding tissue. The term “in situ” refers to a tumor that has not spread beyond the place where it originally developed. By definition, DCIS is a non-invasive form of breast cancer because the cancer cells are confined to the milk ducts of the breast.

My 1st surgery (Lumpectomy) was in April. All went well, but after testing the mass that was removed they found more cancer speckles in the breast.

May 2012
My options were to do another lumpectomy or have a mastectomy. I opted for the mastectomy (2nd surgery) and at the same time they inserted an expander behind my breast muscle to stretch my skin and get it ready for in implant and reconstruction.  I was down for some time recovering both physically and mentally. Cards, prayers, plants and support played a huge part in my recovery.

June 2012
In June I had a 3rd surgery. My mastectomy didn’t heal and they removed 3 more inches of skin from my breast.

July, August, September and October were healing months for me and my family as well. During these months I had weekly doctor appointments and had saline injected into my expander to stretch my skin and get it ready for an implant, but by the end of the saline treatments, the doctor realized that I didn’t have enough skin to accommodate the implant due to the 3 inches that were removed.

November 2012
In November, a week after Thanksgiving, I had a 4th surgery. Since I didn’t have enough skin to reconstruct my breast, I decided to undergo a TRAM Flap Breast Reconstruction. This surgery was a big one.  It began with an incision from hip to hip. Then, a “flap” of skin, fat and one of the abdominal muscles was tunneled under the skin, up to the chest to create a new breast. Recovery is difficult and very painful because I had to adapt to the loss of some abdominal strength (up to 20%). A mesh was placed in my abdomen to support the space where the muscle was removed to prevent a future hernia.

December 2012
Two weeks later, I was back in the hospital with a fever of 102. I was diagnosed with an infection in my abdomen. They put a PICC line (Peripherally Inserted Central Catheter) in my arm so I could give myself three I.V. infusions of antibiotics a day for a month.

January 2013
After the antibiotic treats, my body continued to spike fevers and landed me back in the hospital. This time they opened me up again (5th surgery) and removed the mesh from my abdomen.  I recovered slowing with what felt like gallons of antibiotics a day through my PICC line. I was just happy to be home with my family.

February-July 2013
Since the mesh was removed from my abdomen, I developed an abdominal hernia. It grew to the size of a 5 month pregnancy. I was very uncomfortable with the pressure and always afraid of herniating. The doctor’s told me they couldn’t operate until August due to too much scar tissue and blood loss from so many surgeries.

August 2013
I had a hernia repaired. I’m well and very happy to be with my family.

November 2013
Participating in the Susan G. Komen walk for the cure San Diego