Posted at 12:44h in Spotlight by Volunteer Komen 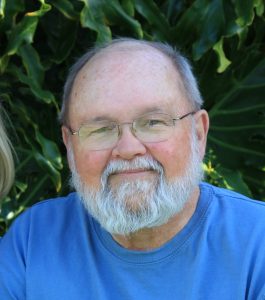 In 2010, Becky Izadi’s father, Ron Lewis, was diagnosed with breast cancer. While breast cancer is known to be a woman’s disease, it also occurs in about 1 percent of men. Survival rates for men are the same as for women with the same stage of cancer at the time of diagnosis. However, like Ron, men are often diagnosed at a later stage because men tend to be less likely than women to report symptoms, which may lead to delays in diagnosis.

After both Becky and her father’s diagnosis they had a double mastectomy twelve days apart. With the rest of their family supporting them they underwent surgery and prepared to continue fighting their cancers.

Ron had cardiac surgery years before his breast cancer diagnosis. When he felt an abnormality in his chest, he thought it was from his earlier cardiac surgery so he waited to get it checked out by a doctor. Unfortunately, this meant that when his breast cancer was found it was at a later stage than his daughter’s who had been fortunate to catch it early. After treatment of chemotherapy and radiation, Ron passed in 2011. 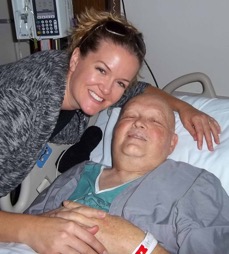 In memory of Ron, Becky and her sister Margie participate in Komen San Diego’s Race for the Cure and the Komen’s 3-Day. Their Race team name is “SuperDad” and they wear the color blue in an ocean of pink to bring attention to the men who also get breast cancer.

After six years cancer free, Becky has recently been re-diagnosed.

“I am ready for a big fight, with a big victory,” said Becky. “I also want people to stop whispering about cancer because if we are vocal, we can fight.”

In response to what men and women should know about breast cancer, Becky said, “Do not hesitate to get that one little thing checked. Denial is your biggest enemy.” People, especially men, sometimes don’t want to get checked when they notice something abnormal in their chest because it may be nothing, but catching breast cancer early is important to increasing survival rates.

This father’s day hug the men in your life. Spread the message: men also get breast cancer and if they notice anything abnormal they should check with their doctor.